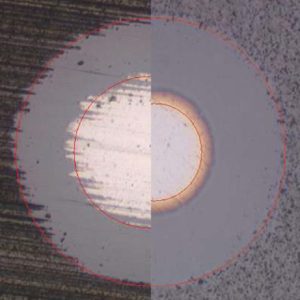 What is meant by the term “triple coatings”?

“TripleCoatings®” is a term coined by Platit, a Swiss manufacturer of PVD coating equipment, to identify a new generation of coating structures that they introduced in 2007. They specifically designed their cathodic arc coating unit “Pi311” to utilize 4 targets inside of the coating chamber to produce the TripleCoating3®.

The film structure consists of 3 thin film layers that are stacked on top of each other (like two slices of bread surrounding a filling to make a sandwich). The initial layer that is applied after the metal ion etching of the substrate is a layer that promotes adhesion. The middle layer of the sandwich is a thicker core layer that is grown in either the Monoblock or Gradient film structure. The top, or “capping,” layer is then deposited as a thin nanocomposite film structure

Let’s break down the different coating structures and describe them in more detail.

The Monoblock Structure is the simplest structure. All of the targets are the same, and they run continuously during the deposition steps. 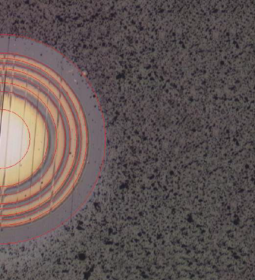 The Multilayer Structure has a “sandwich” structure which achieves a higher toughness at a lower hardness than a monoblock coating structure. Another key benefit of the “sandwich” structure is that any microcracks that develop during use are contained within the layer where they occur, instead of spreading all of the way through the film. 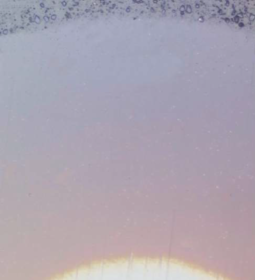 The Gradient Structure begins with a CrN or TiN adhesion layer. Next, it is overcoated with a constantly varying ratio of metallic elements. This occurs so that the film exhibits maximum toughness at its core, and the highest hardness towards the top of the coating layer. The gradient in the image of the film above is visually indicated by the slight color shift. Notice the shift from the top to the bottom arc, where the color has turned white and yellow. 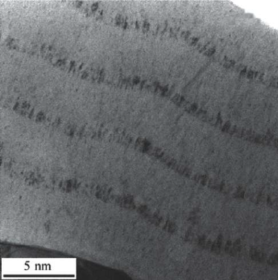 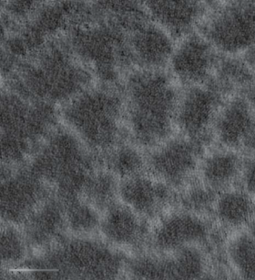 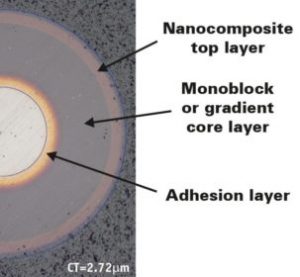 TripleCoatings®, a series of Platit trademarked structures, were developed as premium coatings for demanding machining applications. They utilize 3 distinct layer structures to produce an optimized film structure of three stacked layers that are strongly bonded to each other.

They begin with an adhesion layer of TiN or CrN that is about 2,000 to 5,000 angstroms thick, and is tenaciously bonded to the surface of the tool.

Next is a thicker “core” layer that is of the Monoblock or Gradient coating structure. It provides the high toughness that a stacked structure provides. In most circumstances, this core layer is either AlTiN (for nACo) or AlTiCrN (for nACRo). This layer bonds well to the TiN or CrN adhesion layer.

Finally, a thin nanocomposite layer is applied within the same chamber pumpdown to act as an extremely hard and wear resistant topcoat. This topcoat, or “capping layer,” has a unique structure in which very hard TiAlN (for the nACo film) or AlCrN (for the nACRo film) grains are embedded into an amorphous silicon nitride (Si3N4) matrix that limits the encapsulated grain size. This layer exhibits extremely high nanohardness at very high toughness, and provides extremely high heat resistance.

By deposition of very different kinds of materials, the components (like Ti, Cr, Al in the first group, and Si in the second group) are not mixed completely, and 2 material phases are created. The nanocrystalline TiAlN or AlCrN grains become embedded in the amorphous Si3N4 matrix and the nanocomposite top structure develops. Silicon is added to the composition to increase the toughness and decrease the internal residual stress of the coating. The increasing hardness is generated by the film structure only. The softer amorphous Silicon Nitride matrix enwraps the hard grains and the increasing Si content changes the structure from columnar to isotropic.

The TripleCoatings are especially useful when machining “difficult to cut” materials, highly alloyed steels, and superalloys. The introduction of the TripleCoatings allowed technical and functional improvements in the nACo and nACRo films that ACS offers.

Originally, when nACo (also designated as nACo2 or nACo®) was introduced by Platit on earlier generation coating machines, it was offered as a simple nanocomposite coating. It was a single layer structure of AlTiN grains in the Si3N4 amorphous matrix. Once the TripleCoating® technology was developed in conjunction with the Pi311 system, the name was modified to nACo3® or nACo3, and became the 3-layered structure described earlier, consisting of TiN + AlTiN + TiAlN/Si3N4. The same thing happened with Platit’s original nACRo (also nACRo2 or nACRo®). This nanocomposite coating from the earlier coating machines consisted of a single layer structure of AlCrN grains in the Si3N4 amorphous matrix. With the use of TripleCoating® technology that was released with the Pi311, this coating became a 3-layered structure known as nACRo3® or nACRo3, which consists of CrN + AlTiCrN + AlCrN/Si3N4.

Are triple coatings worth the price premium? That depends on your application and the cost of your tooling, machine setup, and downtime. If you are a tool regrinding provider, and are not stripping the old coatings off the tool before the regrinding operation, then TripleCoating is most likely not cost effective. Conversely, if you have a high value tool that is to be used against a difficult to machine substrate, a TripleCoating could be the solution to incrementally improve an optimized tool design. If you think you have an application that might benefit from this revolutionary coating structure, please contact us to discuss your specific project.